One of the few commodities to date from the 15th century spice trade is still a significant commodity traded to this day. It’s coffee we talk about, and it has played an important role in the expansion of the global economy even before the world took on its present form. Would you like to travel with us to discover the origins of this black gold?

Our journey begins in East Africa. In what we now know as Ethiopia, the first evidence of unsuspected coffee plants was found before the 15th century; It was not until around 1450 that the coffee tree in Yemen, 30 kilometers from Ethiopia, appeared over the Red Sea. How the seed or the wild plants got from one place to another is still a mystery, with many stories but no historical certainty.

Here on the Arabian Peninsula, the coffee seeds were first roasted and brewed similar to today. In the following decades, thanks to the oriental spice trade routes, the beverage spread from Arabia to Persia, Turkey, North Africa, India … and Italy. The first European coffeehouse opened its doors in Rome in 1645, and the port of Venice became the gateway through which Europe fell prey to this new exotic drink.

Coffee comes to the new world

The coffee quickly caught the attention of the big European trading companies. The English, Dutch, French, Spaniards … quickly made connections with the spice merchants who brought grain from their production zones to the Old Continent and took it one step further to bring it to the New World. What happened next does not surprise you.

European researchers discovered that several locations in Central and South America offered astonishing conditions for coffee production, and since then, countries such as Brazil, Colombia, Peru, Honduras or Guatemala have found in the coffee market one of the greatest assets of their economy.

With the entry of Latin American manufacturers into the production market, the bean belt was completed. What is the bean belt? It is the region around the world that is made up of the area between the Tropics Crab and Capricorn, where coffee trees grow:

This limited but wide production area allows up to four continents to make their own coffee using Arabica and Robusta varieties. These varieties are the two species that are mixed together, either pure or in a certain percentage, and an almost infinite variety offer millions of consumers daily with tastes, flavors and experiences.

Other world, the same coffee

After the development of the coffee trade empires fell, new orders arose, wars were led and big events took place. And the world woke up with every hot coffee in hand. One of the oldest estates, capable of combining different cultures and societies with one sip, keeps the world spinning. 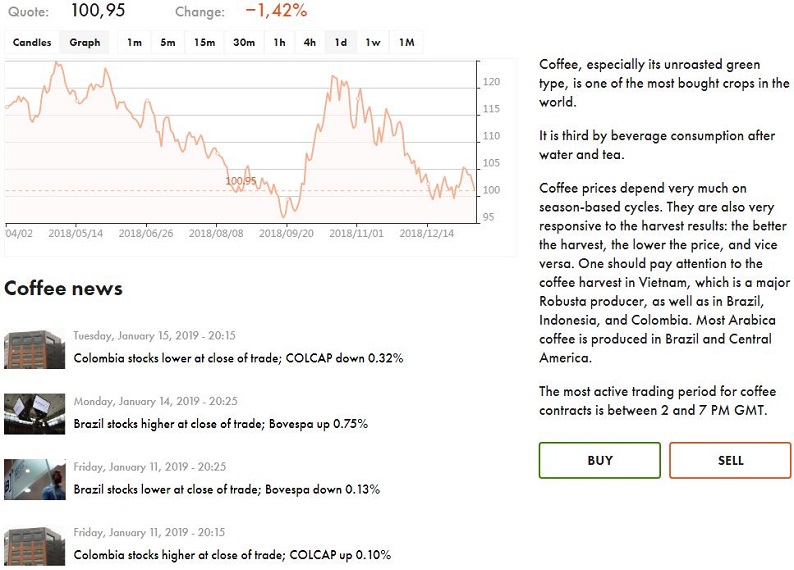 Coffee, especially its unroasted green type, is one of the most bought crops in the world.

It is third by beverage consumption after water and tea.

Coffee prices depend very much on season-based cycles. They are also very responsive to the harvest results: the better the harvest, the lower the price, and vice versa. One should pay attention to the coffee harvest in Vietnam, which is a major Robusta producer, as well as in Brazil, Indonesia, and Colombia. Most Arabica coffee is produced in Brazil and Central America.

The most active trading period for coffee contracts is between 2 and 7 PM GMT.